The original author of JAmiga, Peter Werno, has kindly redirected jamiga.org to this place. The jamiga2 at blogspot address will still function though. But its nice to know that people will find this new site, instead of the old when googling.

I've previously written about my JGit attempts, and I've finally managed to package it all and get it out of my way. You can download the JGit archive from this site, and the new javalangreflect-library is available via AmiUpdate.

What is it, then?

The new native library is nothing special, it only adds one method I found required by the JGit Command Line Tool. The JGit application is just Eclipse's GIT client. And GIT is used by developers for keeping track of their source code (similar to subversion and CVS). I'm not an experienced GIT user, but I have got it to run, and create some directories. I'm hoping some of you Amiga developers with GIT experience, can help me try it out. There might still be things wrong/missing in JAmiga, which hinders it from fully runnning. I've tried it on my Mac, with much the same result.

So, if you're not a developer, this might not be very fun for you. 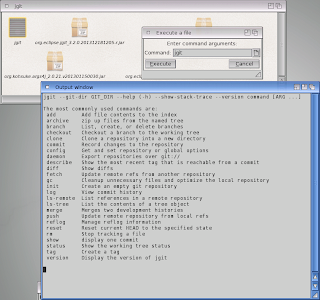 If you want to try it out, here are some hints and resources which might help you in using it:

It should be noted that the client is mostly developed to be used by other Java code (in an IDE f.i.), so the CLI tool might be a bit limited.

And I'm not claiming that it works; I'm only saying it can do stuff.